“Rise together, through these clouds, as on wings”

David, I really got to know you like this! Forever grateful I am…  “Saying No but meaning Yes” 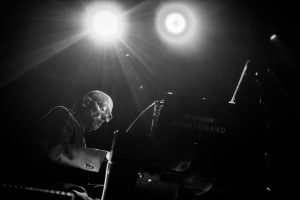 “Don’t believe for just one second I’m forgetting you”

“You’re watching yourself, but you’re too unfair”

The man who shocked the World

On this day, one year ago, the terrible news, that David Bowie had died, reached me while I was driving my son, Carel, who has Down’s syndrome to school. In the car we always listen to Michael Jackson, “this time around”. My phone rang at least 10 times. I thought to myself: “I hope this doesn’t mean my father has unexpectedly died”. Anyway I could not answer the phone because of the stress it would give my son. So I continued my drive to school first.

After that I went to a gasstation to read the textmessage from my mother. She wrote David had died of cancer the previous night! As I am writing this, the feeling of devastation and sadness hits me hard and feels exactly the same as a year ago. I was completely in shock and was shaking and cried out “NO, NO, not David”. But I immediately knew it was true.
I turned on the radio and heard David’s music and people were talking about him to the radiohost. I really had to pull myself together to get to the office safely. When I arrived there I thought: “What am I doing here? I have to get home and turn on the telly.”

All stars belong in heaven, even a blackstar

★ Blackstar “At the centre of it all, your eyes”